Textiles and Seals. Relations between Textile Production and Seals and Sealing Practices in Bronze Age Greece 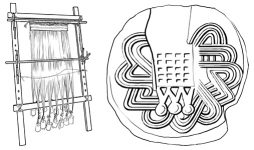 The ‘Textiles and Seals’ research project explores significant and multiple, but largely ignored relations between textiles and textile production, and seals and sealing practices in Bronze Age Greece, from the Early to Late Bronze Age (c. 2650-1200 BCE). The project aims to identify the structure and meaning of these relationships by investigating:

The basic evidence is gathered in an OPEN ACCESS ‘Textiles and Seals’ database. The database is set up to collect the following categories of data:

The relationship between textiles and seals revealed in this project offers a new and more sophisticated understanding of the organisation of textile production, in which the use of seals and sealings is included, and of how various textile tools were subject to administrative practices. The analysis of textile imprints on clay provides new insights into Aegean textiles, their technical uses and structure and parameters.